Wicked Wiki
Register
Don't have an account?
Sign In
Advertisement
in: Actors from Wicked, Elphaba Thropp, Wicked,
and 5 more 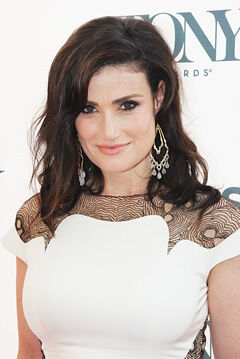 Idina Kim Menzel is an American actress and singer known for her role as the original Elphaba in Wicked: The Untold Story of the Witches of Oz on both Broadway and in the West End (making her the first actress to perform for two production companies). Idina is also featured on the original Broadway cast recording of the musical. Besides Wicked, Idina has had several other acting and singing roles in her career.

Idina was born on 30th of May 1971. She was born as Adinah Kim Mentzel in New York, and later grew up in Syosset. Her mother, Helene, is a therapist, and her father, Stuart Mentzel, worked as a pyjama salesman. Menzel's family is Jewish. Her grandparents emigrated from Russia and elsewhere in Eastern Europe.

She changed the spelling of her surname to Menzel to better reflect the pronunciation the Mentzel family had adopted in America. She was friends with actor Adam Pascal before they worked together in Rent.

In 1995, Menzel auditioned for Rent, which became her first professional theatre job and her Broadway debut. Her final performance in the musical was on 1 July 1997. Following the success of Rent, Menzel released her first solo album entitled Still I Can't Be Still on Hollywood Records. Idina also originated the role of Dorothy in Summer of '42 at Goodspeed Opera House in Connecticut, starred as Sheila in the New York City Center Encores! production of Hair and appeared on Broadway as Amneris in Aida. Her other off-Broadway credits include the pre-Broadway run of Rent and The Vagina Monologues.

In 2003, Idina starred with actress and singer Kristin Chenoweth on Broadway in Wicked, of which she received the 2004 Tony Award for Best Leading Actress in a Musical for her portrayal of Elphaba. During her penultimate performance of Wicked on 8 January 2005, she fell through a trap door and cracked a lower rib. The injury prevented her from performing in her final show on 9 January. Menzel did, however, make a special out-of-costume appearance at that performance, performed her final song, and received a five-minute standing ovation. Idina was replaced by Elphaba standby Shoshana Bean .

Wicked in the West End

Idina reprised the role as Elphaba in the West End production of Wicked when it opened at London's Apollo Victoria Theatre on 7 September 2006. During her run, she was the highest-paid female performer in the West End at £30,000 per week. Menzel finished her West End run on 30 December 2006. Where she was succeeded by Elphaba standby Kerry Ellis (and Broadway lead in 2008).

On 28 February 2013, it was announced that Idina would make her return to the Broadway stage, starring as Elizabeth in the new Tom Kitt and Brian Yorkey musical If/Then. Following the out-of-town tryout, the show moved to the Richard Rodgers Theatre on Broadway and began previews on March 4, 2014. It officially opened on March 30, 2014. For her performance, Menzel was nominated for her second Tony Award for Best Leading Actress in a Musical.

Menzel's film roles include appearances in Just a Kiss, Kissing Jessica Stein, The Tollbooth, Water, Ask the Dust, Enchanted, Frozen, Dancin: Its Still Pretty Much On and Rent, in which she and five other original cast members reprised their stage roles. As a singer, Menzel is known for her wide vocal range and her use of the 'belt' technique.

Her second album, Here, was released independently by Zel Records in 2004.

In 2005, Menzel reprised her role as Maureen Johnson in the movie version of "Rent" along with five of her original cast mates. The film debuted on 23 November 2005.

On 19 July 2010, Menzel performed "Defying Gravity" and "What I Did For Love" in front of President Barack Obama and First Lady Michelle Obama at A Broadway Celebration: In Performance at the White House.

Menzel was honoured with the Breakthrough Artist award at the 2014 Billboard Women in Music awards ceremony.

Menzel announced her new solo album, idina. , on August 5th, 2016 and is to be released September 23rd, 2016. Along with the announcement of the album, she performed one of the songs, I See You, on Facebook live.

Later, Menzel was chosen as the role of Rachel's mom Sandy in the DCOM(Disney Channel Original Movie) Dancin' Its Still Pretty Much On. Alongside Rachel Ramos, Owen Rossman, Amber Dolan, Daniel Goldstein, Dwayne "The Rock" Johnson, and Bill Hader.

Community content is available under CC-BY-SA unless otherwise noted.
Advertisement